In the 19th Century, Little Underbank acted as the main road through Stockport to London. During this time, the arterial carriageway saw lots of horse-drawn vehicles transporting goods and people from Stockport and beyond to the capital city.

As technology advanced in the 20th Century and car ownership became more common, the narrow streets of the Underbanks became a two-way thoroughfare in and out of the town centre. Consequently, the original setts were regularly damaged and replaced with modern setts.

However, with the increase of traffic and heavy vehicles serving the local businesses in the area, these setts recently began to fail and sink. To repair the carriageway and prevent such damage reoccurring, funding has been sought to strengthen the road using a reinforced concrete foundation. The seldom-used bus that serviced the area has also been rerouted around the Underbanks to protect the carriageway.

Street lighting in the Underbanks has also evolved with technological changes and has seen all the traditional Victorian gas lanterns in the area being replaced. Benches, bins and bollards in the area have also been installed at different times, resulting in a wide mismatch of street furniture.

With the restoration of existing buildings, new developments and more businesses opening in the area, the public realm improvements are crucial to the regeneration of the Underbanks and wider Town Centre.

Click on the picture to see how the street has changed overtime.

The transformation of the public realm in the Underbanks Conservation Area was divided into three phases to minimise the impact of the works upon local businesses and residents. The planned timescales and schedules also took into account ongoing demolition and redevelopment work taking place on adjacent properties in the area. However, as a result of the Coronavirus pandemic, the programme of works experienced significant delays.

Below is a detailed summary of the different phases of work:

The first phase of works to enhance the roads and accessibility was substantially complete in March 2020. In recognition of the urgent need to repair the existing failures, the road was excavated and resurfaced between the automatic bollards at Robinson’s Brewery and Royal Oak Yard. The road was then resurfaced with a temporary coloured tarmac due to ongoing redevelopment works to properties nearby.

Phase 2 of the scheme took place during the winter lockdown and was completed in April 2021. This involved the full reconstruction of the carriageway and paving between Royal Oak Yard and the roundabout at the westerly end of Little Underbank. Utility upgrades also took place and new heritage-style street furniture and street lighting was installed throughout the Underbanks as part of this phase.

Once adjacent redevelopment works have been completed, we will revisit the Phase 1 area, between the automatic bollards and Royal Oak Yard, with a full reconstruction of the carriageway and paving using heritage-style setts.

Grant funding from the National Lottery Heritage Fund has been used to ensure this scheme uses appropriate materials, in terms of both their longevity and historic appearance. This has included the installation of heritage-style setts, black street furniture with gold detailing, replicas of historic street nameplates and traditional lantern-style lighting.

In December 2021, plans were approved to reduce vehicle movements in the Underbanks and Market Place, following supportive public feedback for the proposals. This scheme will see parts of Little Underbank closed from 10.30am to midnight on Monday through Sunday, and Lower Hillgate become two-way for vehicles between 4pm and midnight. These works will be funded through the GMCA walking and cycling programme and will take place in early 2022.

The Underbanks carriageway has been re-laid using heritage-style setts. In the past, roadways in towns and cities primarily used setts, until tarmac became widely used in the 19th century. Setts have remained in the Underbanks, but due to the weight of vehicle traffic, the carriageway began to fail and was in desperate need of repair. To prevent this re-occurring, new heritage-style setts have been bound together with high-strength mortar and laid above a reinforced concrete foundation.

Over the years, many of the original street nameplates in the Underbanks had been damaged or removed. As part of the public realm improvements seven new heritage-style nameplates were commissioned to replace the modern signage on Great Underbank, Rostron Brow, Deanery Way, Royal Oak Yard, and Harvey Street. To prevent unauthorised removal, these nameplates were manufactured in cast aluminium and installed using stainless studs on the back for resin fixing into the wall.

Two heritage-style planters have been installed on Little Underbank to introduce more greenery into the area. The plants include Common Box, Spindle and Ivy. The Cheshire Wildlife Trust have also introduced Lavender to encourage wildlife into the urban environment. The planters are being maintained by local businesses Rhode Island and Mustard. More planters will be installed as part of Phase 3 of the public realm works.

The Bins and Bollards

The bins and bollards in the Underbanks have been changed to match other heritage-style street furniture in the area. The typical grey waste bins seen throughout Stockport have been replaced with more in keeping black bins with gold detailing. As to, have all the bollards in the area after being subject to years of mismatched paint schemes. The bollards have also been repositioned to create more outdoor space for the local businesses. 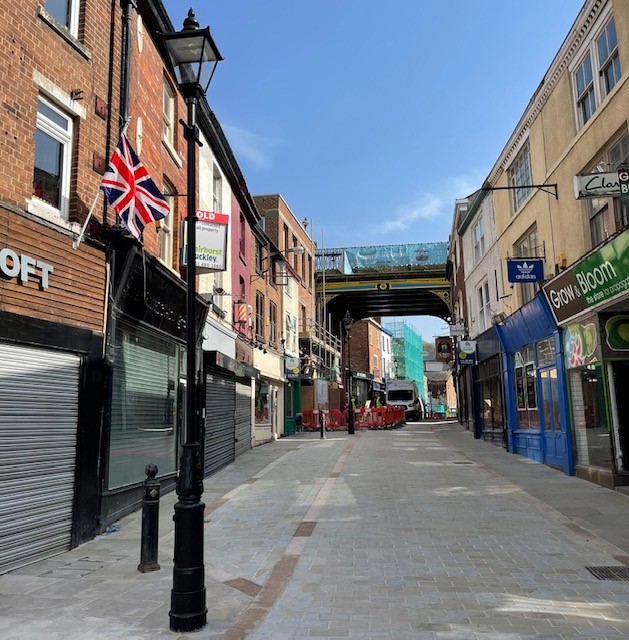 After years of haphazard street lighting additions in the Underbanks, the public realm improvements have seen street lights in the area unified in their appearance. All the lighting on the street now has Victorian-style lanterns, is unified in height, and has been painted black. All the street lighting now utilises LEDs as well, making them more energy efficient.

Street lighting on the Underbanks’ brows will soon be replaced with matching lanterns too. Pigeon spikes and netting will be added to street lighting on buildings to prevent nesting, and reduce cleaning and maintenance needs.

A new lighting scheme has also been designed for the uplighters underneath St. Petersgate Bridge and will see the covered area transformed into a performance space for events and activities.

Discussions are also taking place to remove the mismatched lighting globes at the top of St. Petersgate Bridge, and reinstate traditional lantern-style lighting.

Find out more about the project


Find out about other buildings being restored in the area
l

Find out more about the grant process
Skip to content